Reunion
Originally uploaded by Asplund
Here are two sweaters I haven't seen for quite a few years: to the left one I made for my sister's then boyfriend Martin for his 25th birthday in 1999, and to the right a sweater I made for my sister in the mid-90s.

I haven't seen them for quite a few years; the one to the right had been missing for years when my mother recently discovered it in a box in her basement and I don't see Martin that often after he and my sister split up some ten years ago. (Shortly after he got this sweater, come to think of it - surely that must be a coincidence! Unless there was some kind of Curse of the Green Sweater.) 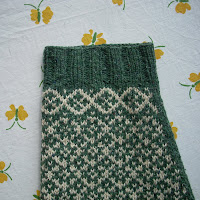 Anyway, I was very pleased to see them again: I like them a lot better than expected. I remember Martin's sweater didn't turn out the way I had hoped, that I thought the patterns looked a lot better on graph paper than knitted up.
Today I like the patterns, especially details like the cuffs, which I had forgotten completely. I was inspired by the Russian sweater from Unskijposad in Uuve Snidare's book about fishermen's sweaters, although this is far simpler. Echoes from the Russian sweater are the horizontal borders with lines between, and if I may say so myself the two patterns blend nicely across the lines (which was what I wanted to achieve).

As for my sister's sweater, I didn't think the colour combination was that succesful when it was new, but I like it now. The lingonberry pattern is from one of the books that belonged to my grandmother, but the sweater shape is my own. A detail I remember fondly is that it was one of the first times I used a picot edge.
posted by Asplund at 4/20/2011 10:27:00 pm

How interesting that your perception(s) of these two creations have shifted. I'm glad you are happier with them now - maybe we're all more critical right after we finish something? They are both beautiful but I LOVE the lingonberry design. Is the pattern available anywhere?

You'r just such a skilled knitter - in every way. I especially love your meticulous details and your
fair isle sweaters.
These are beautiful - and the seems at the shoulders, the cuffs and the seems under the sleeves!
Have you got yourself new labels or are you still Mormor?
Hahahahahahaha!

They are both lovely!

I have the lingonberry pattern in a book of mitten patterns. It is especially difficult because on some rows you have to catch the float. It is beautiful and I love your rendition. However, the green sweater, IMHO, is stunning. The pattern is so pleasing to the eye. What advice can you give us for ribbing on a Fair Isle project? My ribbing always looks so weak and flabby when the rest of the sweater is stranded. Yours seems to have some strength to it.

christinelaennec: I love the lingonberry pattern too and found it in a book by Inger and Ingrid Gottfridsson. There is an English translation of it, "The Mitten Book". Hope you find it!

I agree with you about being critical right after one has finished a project. It's so easy to (or impossible not to) compare the garment to what one had in mind.

Ann: alas, no new labels. There's evidence I'm still Mormor because a group of pupils once gave me a mug with that word on it!

About the ribbing: I used thinner needles and made it fairly wide (3k, 2 p in this sweater. If it's still flabby (which happens) I'd knit it twice as long as I want it and fold it in half.