Viften/The Fan no 3, a photo by Asplund on Flickr.
I've surprised myself by casting on a project practically identical to one I just cast off. Fair trade: I'm making this one for a colleague who's sewing me a shirt.

Yes!
1. Border knitted in the round to avoid a seam at the back of the neck.
2. Border two repeats (see photo above) instead of three (photo here), partly simply for the sake of variation but primarily to save yarn. Each of the 28 repeats grows from 16 to 24 stitches wide. I think it looks nice this way too, and there's no need to worry about running out of yarn - and a couple of centimetres shorter will hardly make a difference.

Now over to some questions and comments on my previous post.

Ron: I picked up stitches around the armohole with a dark strand and wrapped with dark strands to keep the wraps from showing too much. (After discovering light wraps stand out a lot more.) I believe Alba is a Gaelic word for Scotland. (Incidentally, it is also Latin for "white" which is hardly the first thing that comes to mind when you see Starmore's design!)

Ann: it's difficult to explain why I had to turn it upside down, but I'll give it a try! The pattern itself is symmetrical, in a way that if knitted in two colours only there wouldn't be a problem. The colour sequences are symmetrical in a different way, though: a particular colour would be at the beginning of a pattern shape instead of at the end, for example. (Perhaps it wouldn't show much, but I didn't want to risk it. And it was a challenge I liked.)

Knitgoddess: I ordered a kit from Virtual Yarns. The colours are not identical to the ones in the book (and I believe the yarn is slightly thicker too) but at least they're Alice Starmore's own choice. Where can I see your "Pacific" sweater? Ravelry?
posted by Asplund at 8/25/2011 03:00:00 pm 2 comments:

"Alba" sleeve cap, a photo by Asplund on Flickr.
First of all, thanks for all your birthday wishes and lovely comments on my previous post!

Back to work after my summer vacation I've had far less time to knit the past week, but have made progress with "Alba" that I thought I'd share.

The sleeves are modified in three ways:

1. Backand front sections shaped instead of straight from armhole to shoulder to avoid excess fabric under the arm.

3. Pattern turned upside down for shapes and colour sequences to blend better where sleeve meets shoulder.

Viften/The Fan, a design by Marianne Isager, a photo by Asplund on Flickr.
Seamed, blocked and handed over to Åsa. The size was right for her, and she was happy with the modified sleeve length! Turned inside out it looks like this.

I'm quite obsessed with Alice Starmore's "Alba", knitting like mad. (A phenomenon not particularly uncommon...) I've modified it by shaping the armholes to make it a little bit less too big (see earlier post) and will modifiy the neck too; I want it slightly deeper and narrower than the original design. How I wish the photo captured the colours! The gorgeous hints of different greens are lost, for example.

Isager's Viften/The Fan, a photo by Asplund on Flickr.
Only seaming, darning and blocking left - and handing over to recipient, of course!


Modifications in short:
I also cast on a lot more loosely than in my first version of this design for the scalloped edge to be more pronounced, and I added a first row (purls on right side) for the edge to curl slightly.

Isager's Viften/The Fan in progress, a photo by Asplund on Flickr.
There's a choice between short and long sleeves in the instructions; Åsa (who will get the cardigan) and I agree it would be nice with medium-length sleeves. 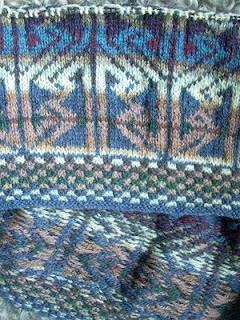 I've been adding to my collection of works in progress, starting Alice Starmore's "Alba" sweater. Stranded colourwork is really what I like best when it comes to techniques, especially knitting a pattern like this. You just can't beat her sense of colours - unfortunately, this photo does not do them justice.

I can't remember when I was this excited about a project last: it's a thrill seeing it take shape in my hands.

The only thing I can't understand is Alice Starmore's tension! I don't knit particularly loosely (don't think I've ever had to change needle sizes to get the gauge called for) but in this case I get 24 instead of 28 stitches per 10 cm (4 in) even though I use thinner needles, 3 mm instead of 3.25 (US 2½ instead of 3).

I could go down one more size but feel the sweater will be too stiff for my taste if I do. Instead, I'm following the directions for a size smaller than I want - and it will still be a bit too big!

Now, I love Alice Starmore's designs and would love to meet her and thank her in person for everything I've learnt and been inspired by - but judging from her tension I would hardly let her massage my shoulders ;-)
posted by Asplund at 8/01/2011 03:32:00 pm 9 comments: