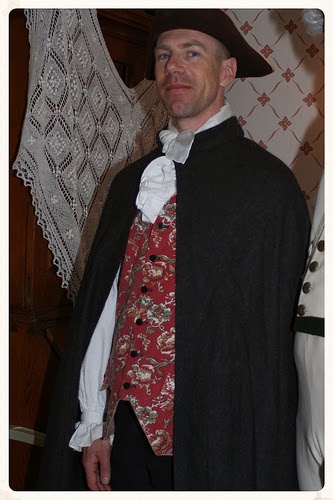 (Post about a weekend with workshops about historical costumes etc.)

Thanks for your comments on "Henry VIII"! His sister Mary is just as delightful to knit: the astonighingly beautiful pattern is slightly trickier, but still easier as there is only one chart to follow instead of three and fewer colours. But what colours! I've said it before and I'll say it again: Alice Starmore for president!

My other main project right now is completely different, a single-colour brioche cardigan with hardly any patterns, but then I'm a polygamous knitter - there's nothing like a pile of different kinds of project to be able to choose what I feel like, or start something new with treasures from my stash. (My relationship to books is similar: facts, fiction, classics, modern etc in tempting piles.)


The only thing you could call a pattern is a double-knitted column in the middle of the sleeves. The increases are on each side of the column instead of near the edges, which I think looks nice. I've been struggling with the shoulder straps, testing different versions.


My first attempt was the strap to the right. I didn't like it, but didn't rip it out at once. Instead I knitted the one to the left first to be able to compare them. An improvement I thought would do - but then I saw the wrong side. That's what I wanted! So, I'll rip them both and reknit them inside out, so to speak. All's well that ends well.

Starmore-mates, a photo by Asplund on Flickr.
Dear friend and soul knitter "Born to knit" and I at a get-together for knitters yesterday afternoon. We'd known each other for quite some time through our Flickr photos before we finally met a few years ago - and today we even live in the same area of Stockholm. Thanks Maria for being a photographer as well as knitter!

Alice Starmore's "Henry VIII" was so much fun to knit and I'm in love with the colours: they're stunning indoors and almost explode in daylight. Well, daylightish. I normally choose projects that I want to make and am less interested in the finished garments - but in this case I wanted the sweater just as much as I wanted the joy of making it. 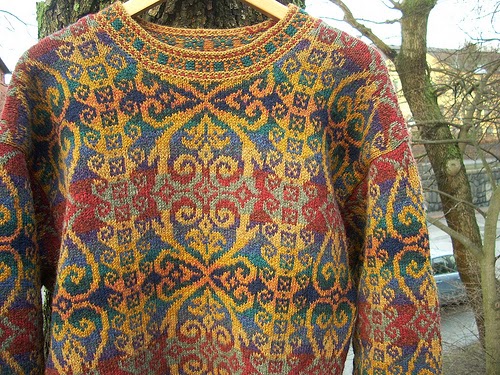 The sweater is very comfortable too (Starmore's 2ply Hebridean wool), and so warm I actually hope it gets a bit colder. Never thought I'd write something like that - until the sweater was finished I actually enjoyed our mild winter.