The orange cast of thought

The cardigan I wrote about in my previous post is finished. I liked the wool a lot, Yaku from CaMaRose. It was sligthly worrying when I washed and blocked it, because it grew like mad when wet. Fortunately, it gradually shrank to exactly the size I had knitted. 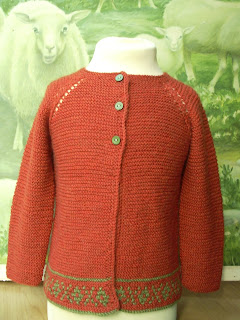 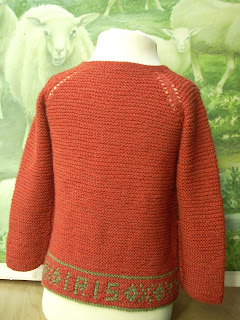 There was enough green wool to make a hat; I used a pattern from the same book by Danish designer Lene Holme Samsøe. The cable pattern is the same that is used between the cardigan raglan increases, although you can't see them in the photos above. 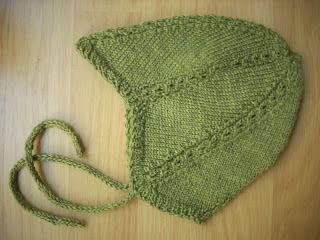 All of a sudden it dawned on me - it will arrive just in time for Halloween! The poor baby will look like a pumpkin wearing the cardigan and hat at the same time...

Speaking of Halloween, check out this post at Bent objects!

Earlier this week I suddenly had to drop all my works in progress and get some new wool. A friend of mine wrote to tell me he and his wife are parents! We were really close friends when we were both students in the 1990s - well, we still are, but they live in the States, so we haven't seen each other for several years now and our correspondence (always handwritten letters!) is quite irregular. Not that such things matter when it comes to genuine frienship - and his way of expressing the news was a delight to read: you're an uncle! (Neither of us has a biological brother.) 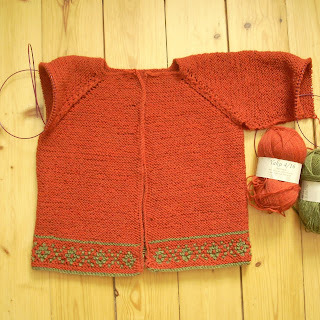 Normally, I want to make garments for adults, so this urge must be caused by some natural, avuncular instinct. As I admire Lene Holme Samsøe's designs, choosing one of her baby cardigans was an easy decision. (Ravelry link here.) The stranded garter pattern is my modification, which I added mainly to add the name to make it more personal. They must be excellent parents considering they've chosen a name that is easy to knit, right? 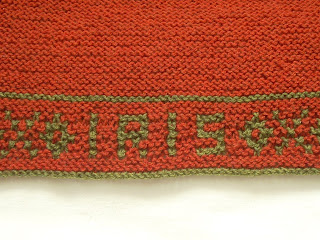 A few days a week I work in a yarn store - today a customer surprised me by handing me a crossword featuring a photo from one of my workshops! (I seem to be writing more about turning up in media than about my knitting these last few posts. Well, it is a fairly new thing for me, so I hope you'll excuse me that I get so excited!)

Now I'm rather curious what the yellow boxes will say when they're filled in. "Triumphal march of the alpha males"? Other suggestions?


A funny thing is that I was actually wearing the very sweater in the photo at work today! Not that it's such an unusual thing: I don't think I've ever been as happy with a sweater as with this particular one, Hanne Falkenberg's Studio Long, and wear it if not daily at least every week. And some weeks daily: this time of the year it's perfect instead of a jacket.

Salve, Sarah! You're quite right I taught Latin - how nice to have a knitter Latin colleague! I got the yarn and pattern through my local yarn store in Stockholm. As I understand it, you can only get them through dealers, not her website. Try www.swedishyarn.com, which seems to be her North American representative. Feliciter!

Thanks for telling me about Jan Brett, knitbrei! Haven't heard of her before - always nice to learn something new!

Inge: to be honest, I'm not sure myself! I've never met anyone called Lavold, only heard her name pronounced by other people - and some say Lávold while others say Lavóld... Maybe someone who reads this will know for certain?

Thank you, Christine! You always write such kind comments :-)


Where did September go? In my case mainly workshops! Not only the workshops themselves, but also planning them. For example, even though stranded colourwork has been a favourite pattern technique of mine for some 30 years I actually haven’t taught it before. High time!

I do enjoy all aspects of workshops: the best thing is meeting the participants, of course, but I also really like planning content, writing and rewriting instructions, and swatching. To the extent that I often swatch swatches... (“Hmm, in this case 96 stiches would be even better than 100” and so on.) Also, I’m grateful I get opportunities to be a teacher, which was my profession for some ten years but which I quit a couple of years ago. In short, I miss the teenagers and my colleagues, but not the school system. Don’t worry, I won’t bore you with details. I'll write about some sweaters instead!

I finished the "Bellis" sweater, a design by Hanne Falkenberg, just in time for a friend's birthday. Funny - and how typical - that I suddenly had only some ten days to finish it considering I cast on at least half a year ago. Well, at least I managed - and it was even dry when I wrapped it up.

With a sweater off the needles I felt ready for  My friend Lena and I decided we'd both knit Alice Starmore's sweater Na Craga, which is on the cover of her book Aran Knitting. Confession time: I'm being unfaithful to Alice Starmore, using Cascade 220 instead of her Hebridean 3 ply.

Another highlight in September was a book release: "Sagornas stickbok" by Celia B Dackenberg. She used illustrations in children's book as her starting point, turning them into real garments in a kind of reverse process. She did a similar thing in "Ylle & bläck" - wool & ink - a few years ago, a book about writers and their real and fictional knitwear, and I have been hoping for a sequel since I first came across it. My sweater Thorsten fiskares tröja was based on a pattern in "Ylle & bläck".

To brag, I found the book release extra thrilling since I actually made one of the garments in the book, a brownish grey brioche sweater. It was quite a challenge using a picture instead of a pattern to make a sweater that not only should be true to the illustration but also possible for others to knit. And hopefully comfortable to wear. I learnt so much from it – thank you, Celia, for inviting me to take part in this project!