Aranish sweater: front and back, a photo by Asplund on Flickr.
What I always find tricky is getting the neck opening right - both comfortable and nice looking. If possible I want complete pattern repeats on both back and front. In this case the centre panel is worked over so many rows the opening would have been too low in front if I had done that. (A low-cut gansey doesn't feel quite right - and not simply because I have no cleavage to flaunt.) I could have knitted half a repeat on the back, but decided to add a little loop shape instead for a finished look.

Another finishing touch I like experimenting with is blending edges and main patterns: getting the ribbing to turn into cable patterns and vice versa as far as possible. 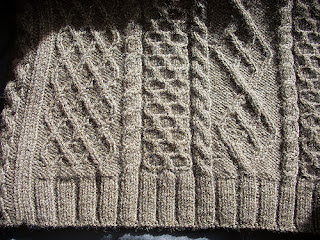 Quite obsessed with the combination of cables and Cascade 220, I've started knitting yet another gansey. Alice Starmore's "Mystic" (from Fishermen's Sweaters) is a design I've admired and wanted to make for a long time - and I thought of it at once when I spotted the teal skeins. 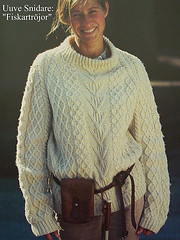 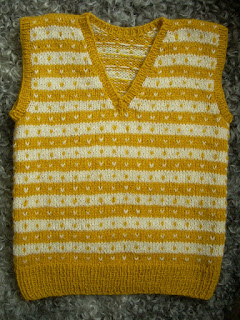 Aranish sweater progress, a photo by Asplund on Flickr.
Perhaps this picture gives a better idea of the construction: the two gusset halves are about to be joined (three-needle bind-off) and the needle shows where the side seam is.

Aranish sweater in progress, a photo by Asplund on Flickr.
Thanks for all your kind words about St. Brigid! It was a really enjoyable project, and it reminded me how much I like knitting cables. Add to this that I thought Cascade 220 was perfect for cables, and what happens? Quite right, yet another new sweater in progress.

I call it Aranish as the yarn is thinner than Aran weight wool, but I'm using typical Aran patterns and am making a raglan sweater - and testing some construction ideas.

First I knitted the four pieces separately back and forth: I find it easier than knitting cables in the round as the cable patterns are done on right-side rows only and in this case every two/four/six rows.

However, I joined the four parts to knit the yoke in the round in order to avoid raglan seams. Instead, there are cables wih decreases on each side. 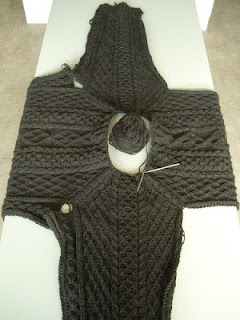 The front is wider than the back: there are side panels with increases to make gussets. (Same thing with the sleeves.) Therefore, the side seams will be closer to the centre of the back. This way I could accentuate the sides with a cable pattern without a seam in the middle of it. Not that it would have mattered that much, but I wanted to see if it worked.


The colour (no 9465) is difficult to photograph, but it is sort of cool brown with hints of grey in it.

St. Brigid: attaching neckband, a photo by Asplund on Flickr.
This is the first time I've knitted a neckband separately before sewing it in place - but probably not the last time! It was rather tricky getting the length right and making the seam neat, but I really like the horizontal braid: a glorious finishing touch to an already gorgeous design. Starmore for president!

I added a finishing touch of my own: framing the sleeves with cables that slant in opposite directions. When joined by the sleeve seam they form a new cable pattern.

With this sweater finished I thought I'd return to the 19th century-style "spedetröja" I started a some time ago and that has been lying waiting patiently in my bag the past couple of weeks. But lying under what? Look at the tip of the needle! Perhaps it bent out of resentment being neglected.