At long last I've finished the twined mittens I cast on for Cecilia in April. There was no hurry then, and when I picked them up again after summer I had some difficulties with the pattern, since I decided to abandon my original idea.

I really wanted the thin lines to frame the hand and merge with the broad line in the middle, but then diagonal (and horizontal) lines pop up while vertical lines sink. I don't mind three levels if it's an allover pattern, on the contrary, but I think it would look silly with just two lines suddenly rising where the mitten ends. Cecilia appreciates simplicity, so I simply skipped the frame idea. Let's just hope her hands won't look like dark grey, cloven hooves.

For examples of Cecilia's immense artistic talents, check out her blog A Matter of Form. Another idea is to visit gallery Sigtuna Kulturgård, where she and her husband Mattias will be displaying their work during three weekends starting on Sat. 7 November. 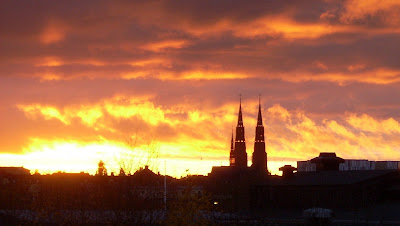 The mittens look great! And that is such a beautiful sunset!

The mittens are charming. Does the cast on have a non curling quality? And the loops. Are they for hanging up the mittens to dry? Or for hanging on your belt if you are working? You must be wonderfully happy with them. Did you know we have an Uppsala in Ontario, Canada? I used to work near there. Your photo is a perfect example for designing a sweater around colours from nature. (http://bighugelabs.com/colors.php) We have a twin spired cathedral where I live in Mexico.
Ron

I'm happy you like the mittens, guys! Hope I got the size right - will know in a few days.

Ron, I find a twined cast on doesn't curl as much as ordinary knitting does. However, I did knit two purl rows to be on the safe side. And for decoration! If you twist the strands in opposite ways the two purl rows you get a braid. Difficult to see in this post, but shows well in the green and beige mittens I made for Lotta and wrote about recently.

About the loops: a twined cast on results in four strands. Sometimes they're darned, often their braided for decoration. I like braiding them and making a loop so you can hang them up. Also, if I only take mine off for a few minutes I often hold them with the loops around a finger to make sure I don't misplace them!

I had no idea there was an Uppsala in Canada! Swedish immigrants? And aren't twin-spired cathedrals wonderful? This one dates back to the late 13th century, although most of it was built later (additions, restoration etc).