After all, I decided to abandon the idea of a saddle with yellow and white square and/or rectangles, mainly because the yellow drowned in this shade of brown. (Which I wanted to use since it was next in turn of the background colours.)

Not particularly surprisingly, Alice Starmore's Book of Fair Isle Knitting provided inspiration. I changed this simple but elegant leaf pattern only sligthly (adding a couple of rows) and used two of my three shades of green in it; I knitted one half of the pattern on each piece to be joined in the middle.

First I thought of grafting the two pieces, but in that case the pattern halves wouldn't have matched completely but would have been half a stitch off (shock horror!) so I cast them off together.

I liked the leaves so much I made them the first sleeve pattern too. The russet squares wasn't a good idea as the darkest background colour suddenly looked very dark 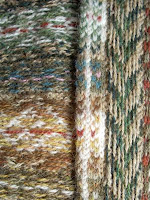 and dominant placed vertically against the borders. I should have taken a photo of how it looked before I unravelled those rows, but unfortunately didn't. (Too eager to knit more leaves!) Here's a photo of the steek instead. The crocheted chain probably could have been closer to the body but perhaps it doesn't make much difference. 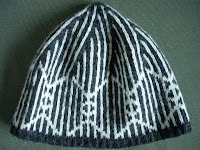 Finally, here's the hat I started to have something completely different to focus on. It weighs next to nothing, but all the floats on the wrong side make it warm.

I agree, the leaves look awesome! And I LOVE the hat, is that more twined knitting?

The hat looks great (it may inspire me to make something similar for myself in the coming weeks) and I am as always very impressed by your color work.

What a wonderful way to join the shoulders. I really like the leaves. Wonderful hat.
Ron in Mexico

Love the hat!
And hope to see a picture of the whole jacket soon :-)

I'm really enjoying the birth of this sweater. The leaves are fabulous, and the greens so subtle. I need to slow down and think about my knitting more ... so your notes are really helpful!

You knit so fast!! I can't believe you're up to the shoulders already, looks great. Love your hat also.

So many kind words - thank you, all! Your response makes me all warm inside.

To answer Yarndude's question: the hat isn't twined but stranded.