Last night I was in despair, beginning to suspect the yarn was superwash in secret. After spending all day finishing the sleeves and weaving in ends, I handwashed the sweater to felt it gently by hand.

As expected, the water made it grow even bigger at first. Not expected and far worse: no matter how increasingly violently I kneaded and rubbed the sweater it wouldn't shrink. Not even a session in the tumble dryer had any effect! (But I've almost got biceps muscles now. Almost.)

I imagined the only possible way to use this sweater would be to pitch it on the main square and sell beer inside.

This morning I wrestled with it again: washed it in the machine, tried a longer session in the dryer, rinsed it alternating between hot and cold water... Nothing happened. Finally I put it in the machine again and washed it in warmer water, so fed up with it I didn't mind risking it would shrink too much.

Would you believe it, it shrank to the right size and it's like thick fabric, just what I hoped, and surprisingly soft. Who's a lucky guy? 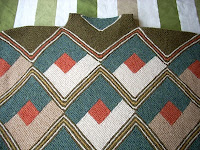 Here's a picture of what the back of the neck looked like before felting. The definition of the garter stitch is far less prominent now, which is something I prefer.

Instead of sleeve seams (not a fan of sewing) I picked up stitches, knitted a row, and then did a three-needle bind-off. Here's what the right and wrong sides of it look like.

Edited to add: I received an award from Annika. Thank you! 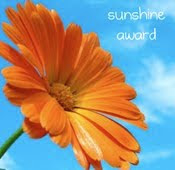 I'm supposed to forward it to 12 other bloggers, but it seems most of the blogs I read already have received it. So, instead I'd like to dedicate it to everyone who reads my blog.

.. you are more than a lucky guy, such a great piece. Congratulations, its a real treasure.. greetings from Switzerland, Christa

Congratulations! It's really a piece of art!

I've wanted to comment with every post of this sweater but my astonishment left me without words each time. Thanks for the story and congratulations, Lucky Guy, it's beautiful.

Lucky you. It must have been how you held your mouth. It will bring back funny memories when you wear it. It is so beautiful. Congratulations.
Ron

It looks great! I'm glad you were able to shrink it down to the right size.

Impressive end result! Glad to hear it's the right size.

So many wonderful comments! Thanks, everyone!

Phew, close call with the sweater. It looks fabulous and shows no signs of struggle. Didn't realize from the earlier close ups that it would a sweater, such a wonderful surprise.

Unbelievably gorgeous. Now could you please post a picture of you modeling it? I would love to see how it fits.

Love the compound Waschmaschinen-Feuertaufe, not only a wonderful combination of words, but a perfect description of the process!

I was sceptical about this project too, not just about the size realising it would be too big, but about the whole sweater! Now that it's finished and the right size I like it and wear it a lot, but it's so unlike everything I've made before I couldn't really say what I thought of it.