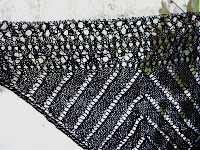 I decided to make a modification moving from the second to the third ("Barège") pattern section. Instead of yarnovers and double decreases on the right side and purls only on the wrong side, I knit the pattern on the wrong side and get only knits (and increases) on the right side. Much easier and quicker! The extra row between the second and third section hardly spoils the design.

Something that does make a difference, though, is that I've decided to make the double decrease by simply purling three together. This doesn't result in the intended centred double crease (with the centre stitch on top). However, I tell myself that with thin black yarn and 4 mm needles it can't make that much of a difference even if mine will be less neat.

I can't tell yet what I really think of the Barège pattern. (It looks nice in the book, but that yarn is different, both material and colour.) It will take a few more repeats before I know what I think; well, most likely I won't until the shawl is finished and blocked. Right now it looks as if I can't knit! But that's one of the charms of knitting lace, the magic transformation when you block it.

If there's enough yarn I'm going to pick up stitches along the hypotenuse and add a border, something like Jane Sowerby's design "Three-cornered shawl in clover pattern" also in Victorian Lace Today. Not nearly there yet, but I do enjoy thinking about possible additions and modifications in advance. Also, when I have had time to think about different solutions &c. it's easier to make a decision once I get there.
posted by Asplund at 4/15/2009 03:14:00 pm