I'm knitting hats for an event later this month, Smaka på Tjust (Taste Tjust – a Swedish district). This is a kind of market that focuses on locally produced goods etc. Carl-Otto, a men's clothing store in Västervik, asked if I wanted to present some knitted items there. DoI?Yes!

I've made a vest specifically for this event; I bought yarn produced at Östergötlands ullspinneri not too far from Västervik, and there was enough left for some hats. I already called the vest Carl-Otto, so these hats are Carl and Otto; they are twins but not identical. 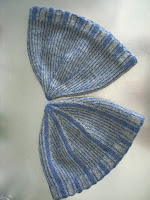 Before then there's another knitting activity to look forward to, Progglördag at Nordiska museet in Stockholm on 12 September. There will be a corner where visitors can try knitting graffitti and I've volunteered to help out. I haven't done anything like that before, so it's a fun challenge! 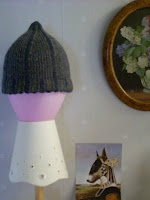 of a new way to block hats. Well, new to me at least – many others probably have thought of the same thing. I never liked blocking hats flat and suddenly had the idea I could try using a balloon; that way it would also be possible to get exactly the right size. It worked. Next problem: how to keep it still until it's dry? Ah! That's what lamps are for!

Aren't you clever!! It can be made to fit any size. Thanks for sharing.
Ron in Mexico