I wish I had knitted this sweater

I wish I had knitted this sweater
Originally uploaded by Asplund

but haven't and couldn't.

I've had some knitted items on display in a men's clothing store, Carl-Otto in Västervik, and one of the visitors told me she had some wonderful hand-knitted sweaters bought in the 80s that she thought I'd like to see. I did indeed! Pictures of two other fabulous sweaters designed and made by this knitter (Siri) here and here.

That evening was a true treat. First I got to see their beautiful garden, then their beautiful home. Kerstin and Arne had lived there for some 30 years, and the house was filled with exquisite and personal belongings; they are both passionately interested in arts and crafts and have things from all over the world. She was born in the far north of Sweden and he in the far south, and they have travelled a lot; Indonesia was one of their favourite countries.

Kerstin told me her mother helped making the Lovikka-mitten popular in Sweden by seeing to it that Princess Sibylla (our present king's mother) received a pair some time in the 1930s; many people became aware of them when she wore them in public. This very soft, thick and warm kind of mitten was first made in the 1890s by Erika Aittamaa from Lovikka. I knitted a pair (now lost) when I was around 11 years old and wore them a lot, especially when it was really cold. 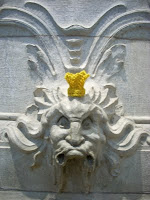 e I haven't written anything about the knitting event at Nordiska museet in Stockholm a couple of weeks ago. That day visitors were allowed to knit "tags" and put almost wherever they liked in the museum. I'm far too much of a control freak to improvise completely – others were making charming and inventive things by happily combining colours and techniques – and so tried to compromise by knitting a little crown. Controlled improvisation, one might call it (trying to be benevolent). Anyway, it was a lot of fun, especially spending a few hours with knitter friends I don't get to see very often.

What's more, it's one of my – many – favourite places in Stockholm. 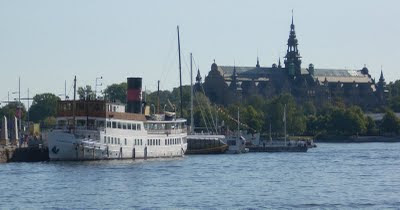 Oh, I bet you could recreate the sweater.

Hi Mel! Well, I guess I probably could recreate it - but I couldn't design anything like it for the life of me. And I'm afraid I wouldn't enjoy knitting it at all. (I like knitting symmetrical patterns that I can learn by heart. Or by fingers, as it were.)

The sweaters are beautiful, however, I am sure I could never attempt to knit anything like that. Did you figure out the construction? I am sure it is not Fair Isle technique. Many, many hours of work.
Ron in Mexico

They're wonders, aren't they? They're stranded and knitted in the round, that much I could tell. Next time I visit I'm going to have a closer look at the constructions; the armholes seemed to be cut, but the patterns kept distracting me...

I just love them! She really went "outside the box" for a moment. The pictures are like a history they reminds me of the old drawings they found i caves.