I knitted "Alex" with the same yarn and therefore named this hat after Carl-Otto's brother; "Blue Onion" in the upper left corner with beautiful yarn my Kiwi friend James gave me. Kia ora, James!

It's rather fascinating seeing how stripe width affects how the blue yarn looks in the three blue and grey hats. (Yarn: Pälsull, Östergötlands ullspinneri.) 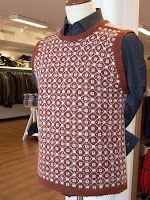 e hats and some of my sweaters and mittens are in a men's clothing store, Carl-Otto in Västervik, where they will be on display for a few days. Map here. 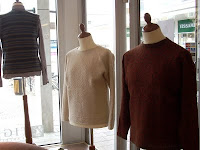 Speaking of hats galore, I'm having fun knitting a hat for a friend. He wanted a soft and warm hat with ear flaps, preferably greenish-brown. It took some time, but at last I managed to figure out how to make the ear flaps the way I want them to look. This is what the "Sea Urchin" hat looks like so far.

What a wonderful display of your knitting. The vest intrigues me and I really admire the borders - so hard to do on Fair Isle type garments. Beautiful work - give yourself a pat on the back.
Ron in Mexico