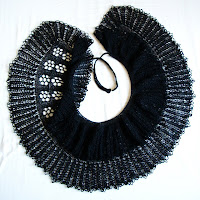 Both are beautiful. The scarf with the different designs is so fetching. And what a lovely cat. I once tried to analyze why I hated knitting scarves and I came to the conclusion that you just get going and you have to stop and turn it. I am going to learn to knit back backwards and see if that makes a difference.
Ron in Mexico

Thanks, Ron! I have no idea how to knit back backwards, but would love to learn. I'm curious to know what it's like, both to knit and to look at.

Elizabeth Zimmermann's daughter does it. It is just a matter of figuring out how you purl and do it from the front side so that nothing has to be turned around. I need a half day to practise.
Ron

Does that explain it.

Great video - thanks, Ron! Got to test that. (Considering I can barely get on a bike from the wrong side, it will probably be a true challenge, though!)