A word of warning: this post isn’t about knitting. However, Asplund stitches too sometimes, so I thought I’d post it anyway. Always living on the edge!* 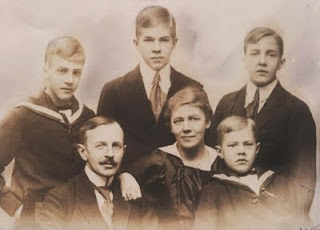 Gustaf & Signe Asplund with their four sons ca 1915. My grandfather to the far left.

A couple of days ago my aunt Lenore handed me a small collection of newspaper clippings dating from the 30s and 40s, which had been in one of her cupboards hiding among a lot of other family papers. They were all about shows and exhibitions that my great-grandmother Signe Asplund took part in. She passed away before I was born, but even though I never met her she has always been part of my life, especially her artistic legacy. In my grandparents’ house there were quite a few things that not only were hers but that she had made, for example silk embroidery and water-colour pictures and some relief-patterned rugs that she had designed. She wasn’t a famous artist, but she seems to have been admired and fairly well known in her field.

Some five years ago I came across some of Signe's original designs on graph paper – to me it was like discovering a chest on Treasure Island! – and used two of them for some cross-stit 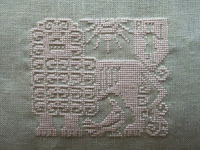 ching, both of them “lion and dove” designs which you can see in this post. I have never seen the rugs, except some black and white photos and therefore had no idea what colours she had used. Imagine my surprise today reading that this rug actually was grey with a green background! I love the sense of humour she expresses in this design – just look at the lion's face! – and how the dove is placed.

A rug featuring the other lion, “Fredsduvan” (the peace dove), was part of the exhibition Nyttokonst 1937 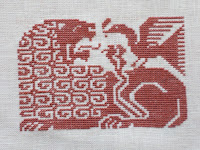 at Nationalmuseum in Stockholm. My favourite thing about this design is the clever way it makes a rectangular shape. Both designs were made in a few copies, and a couple of those rugs were shipped to their new owner in America.

Another one, “Gryning” (dawn), was sent to a church in New York, but unfortunately it doesn’t say which one. Even if I go to New York some day (which I'd love to) I don’t think I could manage going rug hunting in all the churches there even though I would get to see a lot of interesting things… But what a road movie it could make!

*And I mean always. My mother says the most daring thing I would do as a toddler was to sit down on a threshold and go sliding from there.

What a wonderful story and so great that you were able to reinterpret her designs.

These textile arts have a timeless quality to them. Your grandmother's designs are as current and beautiful today as they were in her day. I think that when we carry on traditions we are honouring the traditions of those that went before us. When I am working on a project I often think how my mother might have done the same thing.
Your grandmother sounds like a wonderful person and how lucky you are to know her through her art and designs.
Ron in Mexico

Talent and good looks clearly run in the family!

I'm glad I read your post today. Sometimes I wait days to read posts because my psyche can only take so many finished objects in one day. So I was thrilled to see about your wonderful family history. Inspiring!

Ron, thanks for you kind and thoughtful words. I was particulary moved by your writing about my getting to know her "through her art and designs." I hadn't really thought about it, but that's exactly what it's like. I appreciate your putting words to it very much!

OldRound, glad you liked reading the post! What's happened to your blog?

hi asplund,
my grandpa worked as a weaver in nj usa back when he was 17.
his daughter designed rugs in the hand manufacture they had with her husband.
i too had known nothing about all of my aunt's talents (she also did watercolor) being just a kid when her husband died and their kids turned the manufacture into a cleaning rugs and selling ones.

OX it's a tresure to come from such families, it is to me.
OX