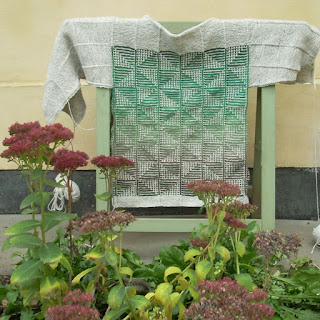 It took some thinking and rethinking (not to mention knitting and reknitting) before I made up my mind about the sleeves. I decided patterned sleeves would be too much of a good thing; instead they would be grey with slipped stitches to create vertical lines like the ones in the body, the one in the centre elongating the line created by the shoulder join.

Here's the first attempt - or, rather, the third one, but the first one I took a photo of:

The slipped-stitch lines are evenly spaced, with the same number of stitches between them as there are between the lines on the back and front. A good idea in theory but less so in practice; it would look just fine if the sleeve was a separate unit (a not particularly useful garment) but attached to the body it simply doesn't look very tidy.


Here's the final arrangement, where the lines blend with the mosaic pattern repeats. This solution entailed narrower centre panels, but I actually think it looks as if this might be the original thought rather than a solution:

Right now I'm thinking of different mosaic pattern ideas for the cuffs to add some colour to them. Also, I will probably also add something to the provisional neckband.
posted by Asplund at 12/10/2015 11:15:00 am

I am in awe of your design skills! I hope you had a lovely Christmas, and wish you all good things in 2016. X