One of the first Marianne Isager designs I knitted was the "Fingers" sweaters almost 20 years ago. (Ravelry link here.) At the time I didn't use her own wool Tvinni but a thicker wool-silk blend. It's a sweater I've worn a lot and still wear. It was fun to knit too, so when I found Tvinni on sale at Loop in London a couple of weeks ago I decided it was about time to make a new one. The pattern is hiding somewhere, but I really don't need it as I've got a "sweater copy" of it. 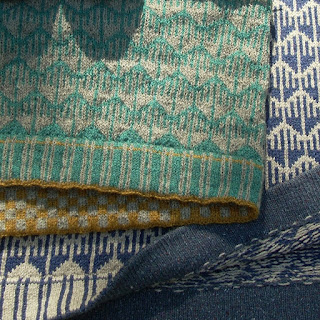 With my new wool I chose petrol (it's darker in reality) for the background as it looks better with the yellow/golden mustard wool. Also, it's nice to reverse dark and light to see how it affect the pattern.

There are three modifications regarding the hem:


As mentioned above, I've been to London: highlights nonstop for a week! A daytrip to the William Morris Gallery, for example, which resulted in this splendid example of Necessary Equipment:

Not for my glasses, but for my tatting shuttles. I may have to get new ones, because plastic shuttles feels rather blasphemous in a Morris case. 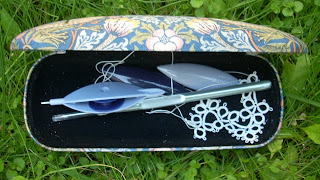 My new pincushion is another example of necessary equipment. I didn't get it in London but in Stockholm, at Gallery Yamanashi. The basket is made of birch and the "cushion" is a ball of felted wool. If you're in Stockholm recommend a trip to the gallery to see Ulla Neogard's work. 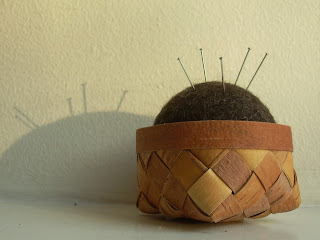 Last, a surprising discovery at Liberty in London - and an opportunity to brag a bit! I actually saw my own name (in small print, but still) in the yarn department. There on a shelf was The Knit Generation, in which my contribution is a brioche cowl pattern. Silly, of course I know it was printed - I even have a copy of it - but it felt funny finding it there. And thrilling, of course! 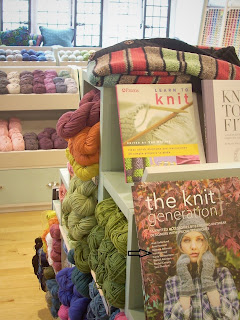