Calling it an identity crisis would be an exaggeration of scandalous proportions, but someone who doesn't feel like knitting doesn't really feel like myself. I've reminded myself that's me too, except not very often. Anyway, it seems to be time for my usual self again! Perhaps simply writing about it helped, like trolls that burst in daylight? Not to mention spotting this particular shade of blue: 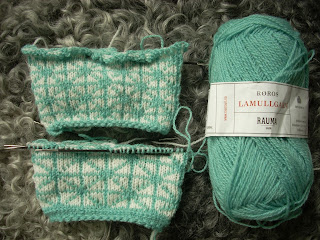 I'm going to knit mittens. Above in the photo is my first cuff attempt, based on an Estonian pattern. I like it, but I do think the pattern works better in the enlarged version below. In both cases the cast-on method is the "double-start" method (decorative and elastic) described by Nancy Bush in her book Folk Knitting in Estonia, which I highly recommended.

To keep the edge from curling outwards I added a purl row in the first cuff. It worked, but didn't look quite right, and as I was going to modify the pattern I might as well try something else. In the second version I used the same cast-on but added a "vikkel" braid instead a purl row, which worked just as well but looks a lot better. The braid is described in the same book. Next step will be to decide what pattern for use for the main part, not to mention what kind of gusset to make. Exciting!

I really could not understand a word, but so wonderful to see you knitting and to hear your voice. You are a real star!!
Ron in Mexico

How fun! It was lovely to see and hear you. I only understand "handsarbet" and "stickexpert". I love when you lie down on the bench and keep knitting! Great. Oh - and nice jumper you have on there!