I've folded the shawl in half to make it easier to block; not only out of a lack of space, but mainly to make sure the two halves become identical in size and shape.

It's a method I've tried before and I think it's far easier than measuring and rearranging the shawl and all the needles. When it's dry I'm going to dampen the middle of the back and reblock that part to avoid a crease. 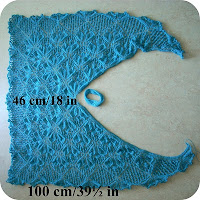 Actually, I had to change my plans and skip the border along the top, realizing there wouldn't be enough yarn after all. Chart C (the big squares without leaves) was far more yarn-consuming than I expected. I had taken it into account how much many more repeats there would be, but hadn't studied the charts closely enough to discover how many more stitches there are in some rows. For example, a repeat consists of 24 stitches in one row, but 32 in another. That makes quite a difference when a row consists of 18 repeats!

This is my first attempt at a crocheted bind-off; I think it suits the pattern very well and it wasn't difficult, so I'm more than likely to do it again. After some experimenting I decided a chain of five stitches would be enough; the pattern has nine, but considering how little yarn I have left it was definitely a good decision to make them shorter.

What a brilliant idea to fold it while blocking!
Very, very beautiful.