Not knitting but rowing

As I haven't been knitting much lately (sic! at one point a whole week passed without a single stitch) there isn't much to write about my projects.

Instead, I could write a post about something a couple of people have asked me: how I manage to knit as much as I normally do.


1. Speed. I've become faster over the years.
2. Taking opportunities. I usually have a project with me so I can knit a few stitches while waiting for the bus or whatever. Fortunately, I don't mind knitting in public anymore - but it took many years, and I still try to find a corner to knit in.
3. I don't work full time. (It just feels like it!)
4. Not owning a car. I commute to work, which gives me a lot of knitting time each week. Most of the Estonian shawl was actually made on trains!
5. Multitasking. I think well while knitting and I usually plan things, write texts (letters, blog posts etc) mentally while knitting. Typing texts doesn't take much time once they're "knitted" into shape. 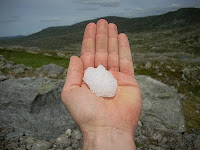 So, what have I been doing instead of knitting lately? Well, the most remarkable thing was finding some snow on 15 July during a trip to Härjedalen last week! This involved rowing across a lake, treading through mosquito-filled marshes and across barren hills before crossing the Norwegian border and walking some more. And then all the way back. Not much more than 12 kilometers (7½ miles) in all, but the hills were fairly steep and there wasn't much of a path.

Last, about the blog post title: here's a link to a poem I like, "Not waving but drowning" by Stevie Smith.

The pictures are gorgeous. I wish I could have been with you. Glad to hear you are enjoying your holidays. Of course, we all want to see you put that twined sweater together!! Un abrazo.
Ron in Mexico

Sometimes, one has to take a break but one thing for sure, you did something very nice during your break,
all the best from the Lake of Constance, Christa

That looks like good fun - and very like the Outer Hebrides. (Do you have midges in Scandinavia?) It's interesting to read about how you fit knitting into your life. Do people come up and talk to you when you get your knitting out? Older people often talk to me when I knit on the bus, and I wonder whether a man knitting would attract more or less attention. Enjoy your holidays!